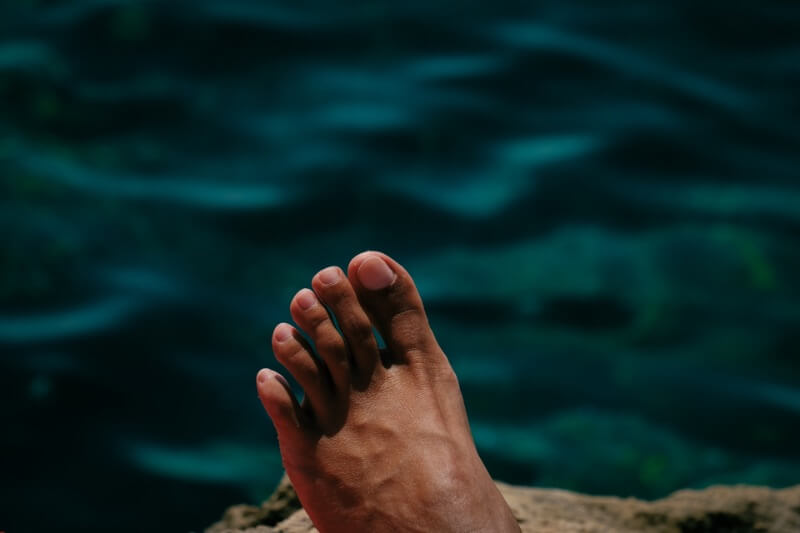 What would you do if you found a dark stripe running down one of your toenails? You might be tempted to ignore the issue or try to disguise it by applying nail polish.

A better, safer approach would be to visit a podiatrist for expert help. That’s because dark stripes – narrow or wide – can point to a form of nail cancer called subungual melanoma.

Subungual melanoma is a potentially confusing medical term, so let’s break it down to make its meaning clear. ‘Subungual’ refers to the area beneath a nail, while ‘melanoma’ means a tumour involving cells that make melanin, the pigment responsible for your skin’s colour.

The problem, which can affect the feet and hands, is frequently found in the big toe. It’s unusual among nail melanomas, as the tumour begins in the area of the nail bed known as the matrix – from where your nail grows – rather than the surrounding skin.

As this type of cancer affects pigment-producing cells, it can lead to discolouration, in the form of a dark line stretching from the top to the bottom of your nail. In fact, the line could well be the first indication that something is wrong and needs medical attention.

Podiatrists and other healthcare professionals refer to dark, vertical stripes on patients’ nails as longitudinal nail pigmentation; and it’s important to emphasise that they’re not always caused by cancer. A recent injury or fungal infection, for example, may be to blame instead.

There’s a key difference between dark lines linked to benign conditions and those resulting from subungual melanoma. When cancer is present, the lines are likely not just to affect the nail itself but also to extend into the nail folds (the hard skin overlapping the base and sides of the nail). Foot specialists call that extension of the discolouration Hutchinson’s Sign.

How the Problem Progresses if Untreated

The lines linked to subungual melanoma tend to be black, brown or blue and easy to spot. However, in some cases they’re pale or discolouration doesn’t occur, which means the issue may be missed by the untrained eye. A benefit of regular podiatry appointments is that serious problems like this can be found and treated as soon as possible.

If a subungual melanoma is allowed to keep growing, the cancer will progress. The stripe on the nail may get wider and more stripes – either in the same or a different colour – could develop. The individual may suffer from bleeding, nodules and nail deformities.

While this kind of cancer is, thankfully, rare, certain factors make people more likely to develop it:

Protecting your feet from the sun’s harmful UV rays can decrease your chances of developing some forms of foot cancer. But bear in mind that sun exposure isn’t associated with subungual melanoma, unlike other kinds of melanoma. As a result, it can be harder to prevent. That’s one reason why foot health checks are so important.

If you have a dark line down your nail, your foot specialist is likely to perform a careful examination. If subungual melanoma is suspected, you will be referred to a dermatologist where a biopsy will be performed. If cancer is found, further tests will determine the stage of the disease and whether it’s spread to other parts of the body.

In the past, it was common for the whole of the affected digit to be amputated. That may be necessary for some patients these days too, but modern subungual melanoma surgery is often more precise and targeted. It may involve either partial amputation or the removal of just the nail and tumour. Chemotherapy or other cancer treatments may be required.

The sooner you seek medical help, the better the outcome is likely to be. In addition, don’t hesitate to reach out to relevant charities, such as Cancer Research, for support.

We have five well-equipped, hygienic foot clinics across London and a wealth of experience in all aspects of podiatry.

If you’re concerned about a dark line on your toenail or other foot issues, please contact Feet By Pody today for prompt assistance.