Why You Shouldn’t Ignore Athlete’s Foot 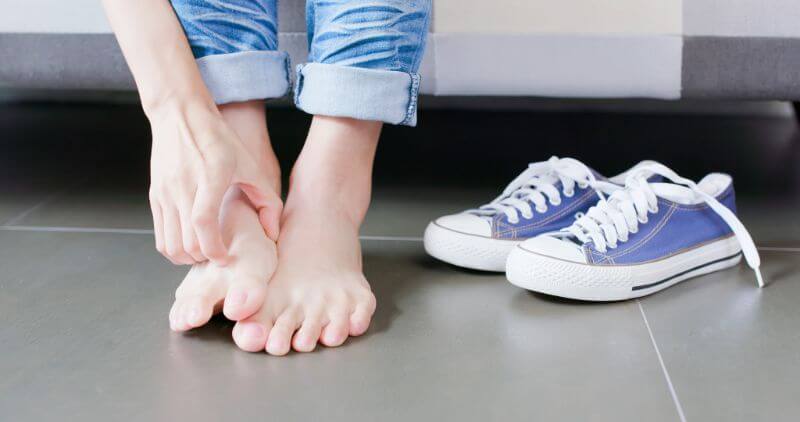 Do you suspect that you have athlete’s foot? Common symptoms include red, cracked, scaly skin, white patches and itching or burning between your toes.

In its early stages, the problem may just seem like a minor irritation. Instead of seeking treatment for athlete’s foot, you might try to put up with the scaly skin and itching and carry on more or less as normal. Looking after your feet could slip down your list of priorities. After all, people lead busy lives, especially in London, where our foot health clinics are located.

However, ignoring a foot condition won’t make it go away. ‘Athlete’s foot is unlikely to get better on its own,’ emphasises the NHS. Indeed, the problem can really take hold if you don’t do anything about it.

The reality is that if you’ve developed athlete’s foot, you’re suffering from a full-blown fungal infection. In other words, your feet have come into contact with a fungus that’s now colonising your skin. You can see a photo of athlete’s foot fungal spores under a microscope on the Biomedical Picture of the Day website. The spores are feasting on dead skin cells.

‘The majority of athlete’s foot cases are caused by a variety of fungi all belonging to a group called dermatophytes,’ explains WebMD. That’s the same group of fungi responsible for ringworm, a condition characterised by the appearance of red, itchy, ring-shaped patches on the skin. In fact, this foot condition foot is sometimes called ringworm of the feet. It suddenly sounds a great deal more unpleasant, doesn’t it?

Athlete’s foot thrives in warm, damp conditions. Athletes are particularly prone to developing the problem, as their active lifestyles mean they often have sweaty feet; but it affects people from all walks of life. After all, everyone’s feet sweat (feet have more sweat glands than other parts of the body), plus people don’t always dry them thoroughly enough after showering.

This infection typically begins between the fourth and fifth toes – the two smallest ones – as that area tends to retain the most moisture. If left untreated, the problem can all too easily spread around your other toes as well. It can also affect the tops, sides and soles of your feet, as the gallery of athlete’s foot photos from Skinsight makes clear.

Worse still, people with this foot condition sometimes find their hands become infected too, as a result of picking at and scratching their sore, irritated feet. The ease with which athlete’s foot spreads to hands is why the Royal College of Podiatry suggests that you should wear disposable gloves to touch your infected feet.

Athlete’s foot doesn’t just pose a threat to your skin. Ignoring the infection gives it the chance to compound your problems. That’s because it can attack your toenails too – and nobody wants fungal nail infections. They’re unsightly, unpleasant and often persistent.

Your toenail could well be infected if it’s thick, brittle, crumbly and yellow. Without effective fungal nail treatment, such as anti-fungal creams and tablets, it may ultimately become detached from the nail bed.

One of the most frustrating aspects of athlete’s foot is that it can be passed between people. It spreads via contact with infected feet or surfaces contaminated with infected skin cells.

As a result, other people in your household and even people you don’t know well or at all (such as those who happen to be members of the same gym as you) could well catch athlete’s foot from you. Everything from socks and bath towels to changing room floors and swimming pools can become hotspots.

That’s certainly a powerful reason to seek treatment and take steps to reduce the chances of the infection spreading. For example, you should avoid walking barefoot, and make sure you don’t share towels.

Successfully treating athlete’s foot is a key part of our London chiropody services. We eradicate the infection with topical anti-fungal medication and, in severe cases, oral medication too. We also offer effective topical and oral treatment for fungal nail infections. Our skilled chiropodists are adept at identifying the best treatment(s) for each patient.

We help people with athlete’s foot on a regular basis, so there’s no need to feel embarrassed.

Don’t ignore this foot condition – book an appointment with Feet By Pody today.

We use cookies on our website to give you the most relevant experience by remembering your preferences.. By clicking “Accept All”, you consent to the use of ALL the cookies. However, you may visit "Cookie Settings" to provide a controlled consent. By visiting our site you agree on our privacy policy & terms and conditions.
If you have reached our website using Google, you can read how google is using your data and cookies for personalized and non personalized ads.
Cookie SettingsAccept All
Manage consent

This website uses cookies to improve your experience while you navigate through the website. Out of these, the cookies that are categorized as necessary are stored on your browser as they are essential for the working of basic functionalities of the website. We also use third-party cookies that help us analyze and understand how you use this website. These cookies will be stored in your browser only with your consent. You also have the option to opt-out of these cookies. But opting out of some of these cookies may affect your browsing experience.
Necessary Always Enabled
Necessary cookies are absolutely essential for the website to function properly. These cookies ensure basic functionalities and security features of the website, anonymously.
Functional
Functional cookies help to perform certain functionalities like sharing the content of the website on social media platforms, collect feedbacks, and other third-party features.
Performance
Performance cookies are used to understand and analyze the key performance indexes of the website which helps in delivering a better user experience for the visitors.
Analytics
Analytical cookies are used to understand how visitors interact with the website. These cookies help provide information on metrics the number of visitors, bounce rate, traffic source, etc.
Advertisement
Advertisement cookies are used to provide visitors with relevant ads and marketing campaigns. These cookies track visitors across websites and collect information to provide customized ads.
Others
Other uncategorized cookies are those that are being analyzed and have not been classified into a category as yet.
SAVE & ACCEPT